When Daniel disappears, Jack and his team realize that they will do anything to get him back. Anything.

Just FYI: Daniel does not “ascend” in this story … there’s lots of angst and pain and misunderstandings, but he ends up back with his friends, where he belongs.

All Ashton Press fanzines and Bizarro zines are available directly from the publishers. To order fanzines, please contact Ann Wortham at ashton7@aol.com. Check out the rest of our Stargate SG-1 zines!

Here are a some short excerpts from the novel:

The fire of the sun beat relentlessly against Daniel’s bowed head, pushing its way past the thin linen folds of his robes, merciless in its intensity. The sand burned his feet, even through the leather of his boots and the cotton of his socks, the glare from the sun reflecting upwards from it, increasing the heat tenfold as it singed the skin of his face. The gentle, dry wind was like sandpaper against every inch of exposed flesh, intensifying the heat of the extreme temperature rather than cooling it. His body had long ago given up what little moisture it had left. His skin was blistered and his mouth was as dry as the desert itself. His lungs burned with every arid breath he drew past parched lips.

Daniel squinted against the glare of both the sun and the sand; even his eyeballs felt scraped raw.

Somewhere out there, there was an oasis. He knew if he just kept walking, he’d eventually reach it. If only he could continue to put one foot in front of another, to persevere. All of his life, he had tried to persevere. To never give up. His father had died young, when Daniel was only a child, but Daniel had always remembered his father’s exhortations to “never give up,” to follow the strength of his convictions and never let anyone sway him.

Sometimes, perhaps, he had heeded his father’s words too well.

Far off, he thought he could see the shape of a pyramid. If there was a pyramid, there was probably a settlement, or at least the remains of one…and that would mean water. Distances were deceiving in the desert, though, and whatever he saw, it could be days away. Sometimes he swore he saw camels. Whole caravans of camels plodding past him. But the people ignored his croaked pleas for help, for water, and he realized they were only a mirage. Only his fevered imagination, conjuring up memories from long ago days spent traveling around Egypt or perhaps simply passages from the hundreds of books he’d read, both as a child and as an adult, coming to life in front of his eyes.

The caravans and the camels weren’t real. He put his head down and trudged onward, every nerve in his body screaming in protest and burning. Always the burning…

Time passed, he supposed. Sometimes he lifted his head and stared at the elusive structures in the far distance, wondering if they now looked closer. He didn’t think they did. It was a goal, in any case, and the only one he had.

“What are you laughing about,” Daniel asked, jolting Jack back to the present.

“Thinking about what Carter said earlier. Back at the base.”

“Oh.” Daniel slanted a sideways look at him.

“Jesus, you really are a cheap date, Daniel.”

Daniel smiled. “Didn’t know it was actually a date, Jack, or I would have ordered something exceedingly expensive.” He sighed and reached for his coat where he’d slung it across the back of the couch. “Guess I’d better get home and catch some sleep. I’ve got to brief SG-4 in the morning before they leave on their mission to P4X353.” He yawned as he shrugged into the jacket. “I really hate these early morning briefings.”

Not really thinking about what he was doing, Jack stopped him with a hand on his arm. “Not even a goodnight kiss?” he joked. “After I paid for dinner and wine?”

Daniel turned and stared at him, his eyebrows raised, a little half smile quirking his lips. “It wasn’t a very good wine, Jack.”

“So, that’s your criteria?” Jack wondered. “How expensive or good the wine was? If it was bad, you don’t…”

“You know…” Jack waved his free hand vaguely in the air.

“Damn it, Daniel!” Jack was both amused and frustrated. How the hell did he lose control of this conversation again? Why was it that Daniel always did this to him? He was just joking around and the next thing you know, he was in the middle of a verbal sparring match. Clearly, Daniel was going to make him say it.

Daniel was staring at him expectantly, no doubt aware that Jack was no match for him, as usual.

Jack stared at Carter and Teal’c, never uttering a word, as they hammered nail after nail into his heart. His jaw was clenched so hard that he was surprised he hadn’t cracked a tooth.

Daniel is innocent; Daniel was always innocent. You are a fool, ran through his mind, over and over again, like some annoying broken record. They were all fools. And the man who had made fools of them was…

Jack got up, still without a word, and left the room, his stride purposeful as he headed for Daniel’s lab. The lab that Hammond was now allowing Jonas to use as an office. The lab where Daniel’s books and mission journals were stacked in boxes and on bookshelves. Where Jonas Quinn was allowed to read Daniel’s property and Daniel’s private thoughts with impunity. He was vaguely aware of Carter and Teal’c chasing after him through the maze of corridors. He thought they were talking to him, but he really couldn’t hear them past the roaring in his ears. Honestly, he hadn’t heard much they had said past the point where he realized Daniel was completely innocent and Jonas was responsible for the false evidence brought to bear against the archeologist.

Jonas was sitting happily ensconced in Daniel’s lab, listening to something on Daniel’s radio, tapping a finger against Daniel’s work table, and reading what was, no doubt, one of Daniel’s beloved books. He looked up at Jack and his mouth moved, but Jack’s ears still didn’t seem to be working.

The roaring just got louder and now there was a red haze in front of his eyes, as well. He didn’t bother saying anything to the man. He’d always thought actions spoke louder than words, anyway. His mind was multi-tasking at the moment. He was thinking of all the ways he was going to make this up to Daniel and one of those ways was by pummeling Jonas Quinn into the ground.

The next thing he knew, Jonas was sitting on the floor, looking up at him with a stunned expression and something was tugging against the chair held overhead in his hands as he tried to connect it with Jonas’ head. “Let go, damn it,” he snarled, finally turning to find himself face to face with Teal’c.

“You must calm yourself, O’Neill,” Teal’c said, the words sounding tinny and far away. He was still trying to remove the chair from Jack’s death grip.

“Let go!” Jack insisted. “I’m warning you, Teal’c.” He tugged at the chair, but he was no match against Teal’c’s brawn.

“What the hell is going on?” Jonas whined, sitting on the floor, one hand wiping the blood away from a split lip. He looked dazed. Jack glanced back at him, and something in the intensity of that gaze made the man involuntarily recoil.

“O’Neill. It will not help Daniel Jackson if you are arrested for assaulting this traitor,” Teal’c pointed out calmly, still holding on to the chair.

“It will help me.” Jack was panting from a combination of uncontained fury and exertion. But he relaxed his arm slightly and felt Teal’c loosen his own grip in response. The moment Teal’c started to let go, Jack spun and slammed the chair down on Jonas. It flew apart at the impact while Jonas tried to roll himself up into a smaller target, jabbering for help. “That’s coming out of your pay!” Jack screamed.

He grabbed the open book from the lab table, the one Jonas had been studying, and he shoved it at the whimpering figure on the floor with all of his might, aiming for his mouth. He’d like it very much if Jonas would just shut up. “You wanted Daniel’s things? Here! Eat Budge!”

Teal’c was evidently too stunned to even attempt to stop him.

Jack strode to the closest bookcase and began pulling the biggest, heaviest volumes off the shelves, hurling them at Jonas with abandon, bellowing in completely incoherent rage. Hawass, Budge, Ellis, Carter, Jordan…the author’s names flew past on their way to the target, each one a reminder of a book he’d seen Daniel reading or something Daniel had mentioned during a briefing or a notation Jack had seen in a mission report. Jonas began to disappear, buried under the barrage as each book was hurled at him with greater force.

“Teal’c! Do something!” Carter begged.

“Leave me alone,” Jack growled in her general direction, and then turned back to his single-minded assault on Jonas, who was almost as incoherent as Jack, by this point. But Jack knew he understood what was happening to him. The fear in his eyes told the tale. He’d been caught in his lies and he was afraid he was about to pay with his life. Hey, at least he understood why; that was more than Daniel had ever known. The bastard was cowering on the floor now, barely moving.

Death by dust jacket, Jack giggled to himself, half out of his mind. Crushed under the weight of scholarship. Terminal paper-cuts. Very funny.

“O’Neill!” Teal’c was yelling now, practically in Jack’s face, “Daniel Jackson would not want his books destroyed in this manner!”

Jack was suddenly aware that there were hot, bitter tears streaming down his face. “He can’t read them, anyway.” He sobbed and drew in a deep breath before tossing another few books at Jonas, who was barely visible now under the pile of hardbacks and the remains of the chair. “Thanks to this son of a bitch!”

Teal’c grabbed him by both arms and shook him. “O’Neill!”

Jack blinked up at the Jaffa, still sobbing and incoherent with grief and rage. “What we did, Teal’c,” he said. “What I did. Oh, God.” He wasn’t making much sense, but somehow he knew that Teal’c understood.

After a moment, staring into Teal’c’s understanding eyes, everything seemed to drain right out of him, the fury leaving as quickly as it had come. He slumped there in Teal’c’s hard grasp, letting the other man’s hands bear the brunt of holding him upright. He glanced at the mound of Daniel’s books covering Jonas Quinn and then up at Carter, who was hovering in the doorway; he was certain the hatred he felt was still reflected clearly on his face. Carter was staring at him, wide-eyed and speechless. She’d seen him in a lot of situations, he realized, but wildly out of control and berserk wasn’t one of them. She was looking a little frightened—not an expression he was used to seeing on Carter very often.

Whatever happened to Jonas next was going to be up to Hammond. But, by god, Jack was going to make certain the man was kept under lock and key until that moment.

Very slowly and deliberately, he pulled himself together and straightened his uniform. “Get some SFs down here right now to escort this man to the infirmary,” he said, nothing but cold contempt left in his voice. We seem to have an intruder on the base.”

Check out our Custom Calendars featuring artwork by Leah Rosenthal and photos by Ann Wortham. Or stop by and visit Leah’s Stargate Cartoon page! 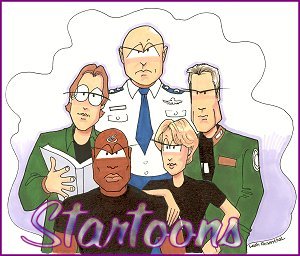