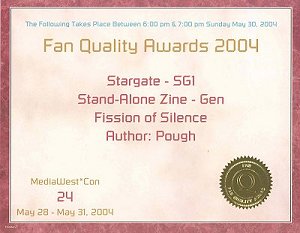 A full-length hurt/comfort novel focusing heavily on the character of Daniel Jackson and the friendship between Daniel and all of SG-1. When a mind and body are split, what exactly can be expected to return? This story is “gen” but please read the content warning below. The novel is available in a net published format and was previously published to the SGHC and Alpha Gate lists as a work in progress. This version has been slightly edited and is brought to you in a printed format with color covers.

Cover art by Sazz. Interior artwork by Sazz. Front and back color covers.

CONTENT WARNING: This is brutal and nasty. Although there are no truly graphic specifics, it is, nonetheless, intense. And although nothing is graphically portrayed, there are mentions of sexual and physical abuse and rape.

Friend us on Facebook to get the latest news about fanzines, cartoons, and our online store!

To order and pay by cash, check or money order (US funds only), please email me and tell me which zines you want and your address . If you are paying by Paypal to use your credit card or an echeck, you can use the shopping cart for each item. Alternatively, if you know what you want and the price(s), you may Paypal the money to my email address but please make certain you indicate on the payment what you are ordering and your address.

Here are a some short excerpts from the novel:

“I gotta tell you, the Tok’ra should really think about getting in touch with the people on Trading Spaces,” Jack said, looking over the latest in crystal technology.

“Jack. Sam. Teal’c,” Jacob Carter called, walking toward them with his hands outstretched. “I trust you found us easily enough.”

“Sam, how are you?” Jacob asked, hugging his daughter and ignoring Jack.

“Oh, fine, I guess,” she said, enjoying the warmth of her father’s embrace.

“He’s home,” Jack added, and with his parsimonious words, Jack hoped to relay his ongoing distaste for the Tok’ra.

“Of course you did,” Jack cracked. “Isn’t it funny how the Tok’ra are on the leading edge of all the best gossip, but when it comes to actually knowing anything at the time, they don’t have a clue?”

“Are we gonna do this again, Jack?”

“You know me, Jake. I like to do these things until they’re done right, and it’s never been done right. Hell, where the Tok’ra are concerned, I’d just settle for being done.”

Jacob stared at Jack with dispassionate eyes and then turned to Teal’c, leading him and the rest of the team down the cavernous halls. “Teal’c, what can you tell me about a Jaffa named Cu’bec?”

“He was a rising and influential warrior under Apophis. When I left my post as First Prime, Cu’bec was earning a reputation for being a brazen yet powerful opponent.”

Jacob lowered his eyes for a moment, and his symbiote Selmak took over. “Our sources tell us Cu’bec has left the Jaffa and would like to aid in the Tok’ra’s cause.”

“Let me guess: You don’t trust him,” Jack said.

“That is correct, Colonel O’Neill, at least not yet.”

“Hey, here’s an idea. Why don’t you keep him at arm’s length, toss him a few table scraps just to keep him coming back for more, and then demand that he be subservient to you. You ever thought of trying that?”

“Look, Jack, if this is about Daniel…”

Jacob turned to Sam. “Is there anything we can do?”

“Wait a minute,” Jack said, raising a hand in the air. “I’ve heard that offer before. When was it?” Jack snapped his fingers and pointed at Jacob. “Oh, right. Eight months ago, the last time we were here.”

“We did all that we felt we could at the time.”

“Which was what, exactly?”

“Jack, this is neither the time nor place…”

“No, I’d like a goddamn answer, Jake!” Jack demanded. “You called us here to pump Teal’c for information. Fine! He’ll talk when you do.”

“You can tell me how long it took the Tok’ra to decide not to help us find Daniel.”

Selmak said, “There was no decision made regarding that.”

“Then was it an overall consensus just to let it die on the table?” Sam asked, entering the fray.

“We discussed in-depth the situation, and it was decided that inquiries would be made at the appropriate time,” Selmak told them.

Teal’c asked, “How often did those times occur?”

Jacob turned away from the question, pinned his lips together and shook his head. “Look, Jack…”

“No, Jacob! I think you oughta answer the man’s question. How many inquiries were made?”

Jacob tilted his head back and closed his eyes. “Unfortunately, the appropriate time never came up.”

“You can’t do this, Jack. We have things to discuss,” Jacob called after him.

“Perhaps the word you are looking for is ‘appropriate,’ O’Neill,” Teal’c said.

“I’m sorry about Daniel,” Jacob called after them, “but the Goa’uld are about to cut off one of our main arteries, and…”

Without losing as much as a beat, Jack turned on a dime and charged Jacob. “Let me tell you about arteries,” he said.

Jack shrugged off her advances and continued to bear down on Jacob. “Arteries are things that can be sliced open by a person when they’ve lost hope that their friends will ever come looking for them. Arteries can be severed wide open when a person realizes that their friends probably haven’t found the appropriate time to inquire about them.”

“Sam?” Jacob said, looking to his daughter, asking without words if what Jack was saying was true.

Sam looked at Jack, not sure if she should display SG1’s dirty laundry out in the open. They had never discussed Daniel’s scars, had never talked about what might have happened, had never as much as acknowledged that each of them knew. But with Jack’s blustery breach of Daniel’s private sufferings, Sam felt it was only right to fill her dad on the part of the pain they were all living with.

“We think Daniel tried to commit suicide, Dad,” she informed him and found, as she said it, how the words, like acrid bile, left her wanting to retch. “He slit his wrists. It looks like he tried to kill himself while waiting for us to find him.”

“You couldn’t have, Jake, because that wouldn’t be prudent.” Jack slapped his hat on the back of his head. “Well, I blame the Tok’ra for that, and I blame myself for taking your word eight months ago that you wanted to help.” Jack spun around and began to walk away. Teal’c followed.

Jack paused just before entering. Paused outside the door and quashed his desire to just let things be as they were. He didn’t know what to say or how to act even, and going with his instincts (which seemed to work for him, but somehow always managed to piss people off) wouldn’t help anyone at that point.

He looked inside the room and saw him there.

There he was. There was Daniel Jackson, wearing the ubiquitous white scrubs, the ever-present Air Force blue robe, the ridiculously ineffective disposable slippers, and all because Daniel disregarded Jack’s direct order all those damn months ago.

Filled with an unquenchable anger, Jack watched Daniel stare at a pencil, held up close to his eyes, examining it as if it were the one artifact that they had been searching for all those years.

Daniel’s stunned expression shot up and just as quickly he looked back down.

“Carter thinks I’ve been avoiding you. I’m not. I’ve been busy,” Jack phlegmatically said, pulling up the back of his pants. He hooked his thumbs into his waistband and pulled air through his pursed lips. Jack played with a canker on the inside of his cheek with his tongue and blinked. “So, I hear that…”

“Sorry,” Daniel mouthed, his eyes shifting from Jack’s face to Jack’s chest and back down to the floor.

Daniel reached for the pad of paper next to him and scribbled a note. He turned it to Jack—sorry.

Jack straightened up from the crooked position he had taken to read the note. “Sorry for what?”

Daniel pulled the pad back, notated a quick line and handed it to Jack—Not for orders.

Jack crumpled his brow. “What?”

Daniel looked at the note and ripped off the top sheet off. He tried again, writing almost in a panic, as if Jack might leave in the middle of the sentence—not follow orders.

Jack read the note with a carefully crafted apathy and tossed the pad back on the tray. Apologies and excuses—hollow, empty words that meant nothing and changed things even less. Jack walked to the second, unoccupied bed in the room and sat on it. He hooked his heels on the lower rail, wove his fingers together and refused to acknowledge the plea for forgiveness.

Daniel sagged back in his chair, dejected and drained. He lowered his chin, rubbed his eyes and nodded. A frigid draft snaked across the back of his neck and down the collar of his robe. Daniel tightened the neckline and drew up his quaking shoulders.

“Seems he knew a guy who had a friend who once dealt with a guy who thought he heard of someone who might have known something about you. Eight short months later, here you are,” Jack stated, never once changing the stoic, somber expression on his face. “That’s my side of the story; what’s yours?”

Daniel grabbed the pencil off the tray and held it for a brief moment in his shivering hand before beginning to write. When at last he had scribbled out the details to the best of his recollection and ability, he tossed the pad onto the bed between his chair and Jack, and rubbed his hands together against the cold.

Jack glanced at the pad and then at Daniel who stared somewhere other than at Jack. Jack hopped off the bed, pushed his sleeves up and picked up the pad, coughed a little and read it at arm’s length—

Daniel’s mouth opened and closed, he blinked a number of times, shook his head and shrugged.

Jack looked him over and wondered if he was telling him everything. “Well, doesn’t matter. You’re back.” He stepped toward Daniel, dropped the pad of paper onto his table, and began to leave.

Daniel tapped the table and held up one hand, hoping Jack would wait until he finished writing. Jack turned back, stymied by Daniel’s call to him, and when he turned it was with great drama, showing his irritation.

Daniel made quick work of the note, keeping a watch on Jack, making sure he wasn’t leaving. He let the pencil fall and handed Jack the note.

“You’re sorry,” Jack said, reading the note. “I know. You already told me.” He passed it back to Daniel.

Daniel took the note and folded it in half and then half again and half once more. He pinched the tight folds between his blue-tinged fingers.

Jack looked around the room, pretty sure he was finished for the day. “I, uh, I have some work to do,” he said. He ran a hand through his metallic hair. “I…I’ll check in on you…later.”

No, Daniel thought, his eyes darting from side to side. He bit his lower lip and slapped his hand against the table to get Jack’s attention once again. He hunched over the table, wrote as fast as he could, tore off the top sheet and thrust it out in front of him for Jack.

—came for info? That all?

He stared with bitterness and anger at Jack, daring to look Jack in the eye.

Check out our Custom Calendars featuring artwork by Leah Rosenthal and photos by Ann Wortham. Or stop by and visit Leah’s Stargate Cartoon page!